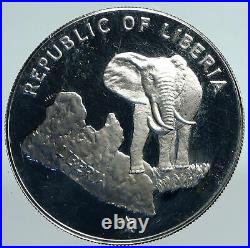 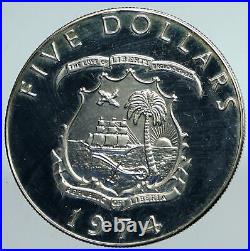 Item: i89793 Authentic Coin of. 1974 Proof Silver 5 Dollars 41mm (35.56 grams) 0.900 Silver 0.9867 oz. ASW Reference: KM # 29 FIVE DOLLARS THE LOVE OF LIBERTY BROUGHT US HERE REPUBLIC OF LIBERIA 1978, Coat of arms of Liberia, date below. REPUBLIC OF LIBERIA LIBERIA, Map of Liberia and Elephant. Liberia officially the Republic of Liberia , is a country on the West African coast. Liberia means “Land of the Free” in Latin. It is bordered by Sierra Leone to its west, Guinea to its north and Ivory Coast to its east. It covers an area of 111,369 square kilometres (43,000 sq mi) and is home to 4,503,000 people. English is the official language and over 20 indigenous languages are spoken, representing the numerous tribes who make up more than 95% of the population. Forests on the coastline are composed mostly of salt-tolerant mangrove trees, while the more sparsely populated inland has forests opening onto a plateau of drier grasslands. The climate is equatorial, with significant rainfall during the May-October rainy season and harsh harmattan winds the remainder of the year. Liberia possesses about forty percent of the remaining Upper Guinean rainforest. It was an important producer of rubber in the early 20th century. The Republic of Liberia, beginning as a settlement of the American Colonization Society (ACS), declared its independence on July 26, 1847. The United States did not recognize Liberia’s independence until after the American Civil War on February 5, 1862. Between January 7, 1822 and the American Civil War, more than 15,000 freed and free-born Black Americans from United States and 3,198 Afro-Caribbeans relocated to the settlement. The Black American settlers carried their culture with them to Liberia. The Liberian constitution and flag were modeled after the United States. In January 3, 1848 Joseph Jenkins Roberts, a wealthy free-born Black American from Virginia who settled in Liberia, was elected as Liberia’s first president after the people proclaimed independence. Unlike other African countries, Liberia is the only African republic to have self-proclaimed independence without gaining independence through revolt from any other nation, being Africa’s first and oldest republic. Although it is said that neither Liberia nor Ethiopia, which was a kingdom, were controlled or colonized by foreign powers, this seems contradictory since the country was actually started by the American Colonization Society (ACS). Liberia maintained and kept its independence during the European colonial era. During World War II, Liberia supported the United States war efforts against Germany and in turn the United States invested in considerable infrastructure in Liberia to help its war effort, which also aided the country in modernizing and improving its major air transportation facilities. In addition, President William Tubman encouraged economic changes. Internationally, Liberia was a founding member of League of Nations, United Nations and the Organisation of African Unity. Longstanding political tensions from the 27 year rule of William Tubman resulted in a military coup in 1980 that overthrew the leadership soon after his death, marking the beginning of political instability. Five years of military rule by the People’s Redemption Council and five years of civilian rule by the National Democratic Party of Liberia were followed by two civil wars – the First and Second Liberian Civil Wars. These resulted in the deaths and displacement of more than half a million people and devastated Liberia’s economy. A peace agreement in 2003 led to democratic elections in 2005. Recovery proceeds but about 85% of the population live below the international poverty line. World-renowned expert numismatist, enthusiast, author and dealer in authentic ancient Greek, ancient Roman, ancient Byzantine, world coins & more. Ilya Zlobin is an independent individual who has a passion for coin collecting, research and understanding the importance of the historical context and significance all coins and objects represent. Send me a message about this and I can update your invoice should you want this method. Getting your order to you, quickly and securely is a top priority and is taken seriously here. Great care is taken in packaging and mailing every item securely and quickly. What is a certificate of authenticity and what guarantees do you give that the item is authentic? You will be very happy with what you get with the COA; a professional presentation of the coin, with all of the relevant information and a picture of the coin you saw in the listing. Additionally, the coin is inside it’s own protective coin flip (holder), with a 2×2 inch description of the coin matching the individual number on the COA. Whether your goal is to collect or give the item as a gift, coins presented like this could be more prized and valued higher than items that were not given such care and attention to. When should I leave feedback? Please don’t leave any negative feedbacks, as it happens sometimes that people rush to leave feedback before letting sufficient time for their order to arrive. The matter of fact is that any issues can be resolved, as reputation is most important to me. My goal is to provide superior products and quality of service. How and where do I learn more about collecting ancient coins? Visit the “Guide on How to Use My Store”. For on an overview about using my store, with additional information and links to all other parts of my store which may include educational information on topics you are looking for. The item “1974 LIBERIA State Map with Elephant OLD VINTAGE Proof Silver $5 Coin i89793″ is in sale since Wednesday, March 31, 2021. This item is in the category “Coins & Paper Money\Coins\ World\Africa\Liberia”. The seller is “highrating_lowprice” and is located in Rego Park, New York. This item can be shipped worldwide.