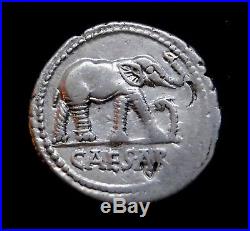 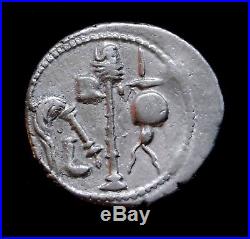 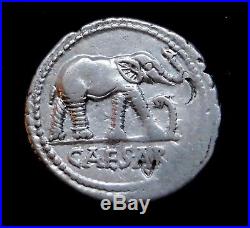 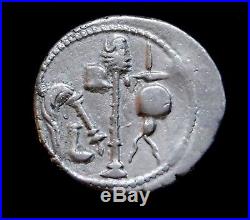 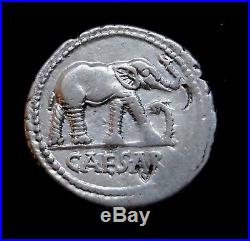 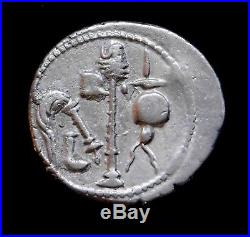 Julius Caesar 49-48 BC Stunning Rare Denarius. AR Denarius (3.71g, 19mm, 5h). Military mint travelling with Caesar, 49-48 BC. Obv: Elephant advancing right, trampling on serpent; CAESAR in exergue. Rev: Emblems of the pontificate: simpulum, aspergillum, securis (surmounted by wolf’s head), and apex. Ref: Crawford 443/1; CRI 9; RSC 49. This coin is guaranteed for life to be a genuine ancient coin. Here at Ancient Auctions we have pledged to uphold the highest ethical standards. Gaius Julius Caesar Latin: CAIVS IVLIVS CAESAR, (13 July 100 BC – 15 March 44 BC), known as Julius Caesar, was a Roman politician, general, and notable author of Latin prose. He played a critical role in the events that led to the demise of the Roman Republic and the rise of the Roman Empire. In 60 BC, Caesar, Crassus, and Pompey formed a political alliance that dominated Roman politics for several years. Their attempts to amass power as Populares were opposed by the Optimates within the Roman Senate, among them Cato the Younger with the frequent support of Cicero. Caesar’s victories in the Gallic Wars, completed by 51 BC, extended Rome’s territory to the English Channel and the Rhine. Caesar became the first Roman general to cross both the Channel and the Rhine, when he built a bridge across the Rhine and crossed the Channel to invade Britain. These achievements granted him unmatched military power and threatened to eclipse the standing of Pompey, who had realigned himself with the Senate after the death of Crassus in 53 BC. With the Gallic Wars concluded, the Senate ordered Caesar to step down from his military command and return to Rome. Caesar refused the order, and instead marked his defiance in 49 BC by crossing the Rubicon with the 13th Legion, leaving his province and illegally entering Roman Italy under arms. Civil war resulted, and Caesar’s victory in the war put him in an unrivalled position of power and influence. After assuming control of government, Caesar began a programme of social and governmental reforms, including the creation of the Julian calendar. He centralised the bureaucracy of the Republic and was eventually proclaimed “dictator in perpetuity”, giving him additional authority. But the underlying political conflicts had not been resolved, and on the Ides of March (15 March) 44 BC, Caesar was assassinated by a group of rebellious senators led by Marcus Junius Brutus. A new series of civil wars broke out, and the constitutional government of the Republic was never fully restored. Caesar’s adopted heir Octavian, later known as Augustus, rose to sole power after defeating his opponents in the civil war. Octavian set about solidifying his power, and the era of the Roman Empire began. Much of Caesar’s life is known from his own accounts of his military campaigns, and from other contemporary sources, mainly the letters and speeches of Cicero and the historical writings of Sallust. The later biographies of Caesar by Suetonius and Plutarch are also major sources. Caesar is considered by many historians to be one of the greatest military commanders in history. International Buyers – Please Note. The item “Julius Caesar 49-48 BC Stunning Rare Denarius. War Elephant. Roman Silver Coin” is in sale since Saturday, December 29, 2018. This item is in the category “Coins & Paper Money\Coins\ Ancient\Roman\ Republic (300 BC-27 BC)”. The seller is “ancientauctions” and is located in Fort Lauderdale, Florida. This item can be shipped worldwide.